We earlier reported that Samsung leaves Nokia behind and becomes world’s biggest phone manufacturer. More to add on this, the latest research from Strategy Analytics, Samsung and Apple both cover 55 percent of global smartphone shipment. The study states that global smartphone shipments grew 41 percent annually to reach 145 million units in the first quarter of 2012. 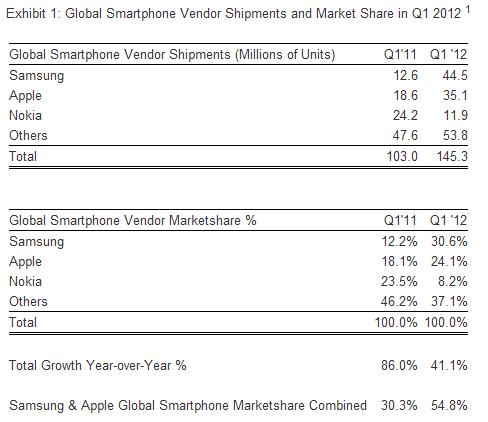 Neil Mawston, Executive Director at Strategy Analytics, added, “Apple shipped 35.1 million smartphones worldwide and captured 24 percent marketshare, as volumes strengthened in key countries such as China, United States and Japan. Samsung and Apple combined now account for more than half of global smartphone shipments for the first time ever. Samsung and Apple are outcompeting most of their major rivals and the smartphone market is at risk of becoming a two-horse race.”