SamMobile has revealed which is what it believes to be a service manual of Samsungâ€™s Galaxy S III (not Galaxy S3 phone), complete with design sketches and hardware specs. The images showed up the â€śdummyâ€ť phone. Talking about the specifications, the supposed manual lists a quad-core 1.5GHz CPU, which deviates some from the 1.4GHz Exynos 4 processor (the company recently unveiled). The camera comes at 8 megapixels here although earlier rumors states that the camera is of 12 megapixels count. The publication source claims that this could be an early draft. All will be revealed soon as the launch is now not so far away. 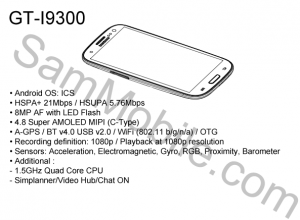