According to the latest figures from Chitika Insights, Kindle Fire web share jumped to 7.5% and iPad fell 7.1% over holidays in Northern America. The numbers which comes after survey of hundreds of millions of impressions from its advertising network between December 1 and December 27, 2012 comes on a result saying that Kindle Fire is a clear winner. 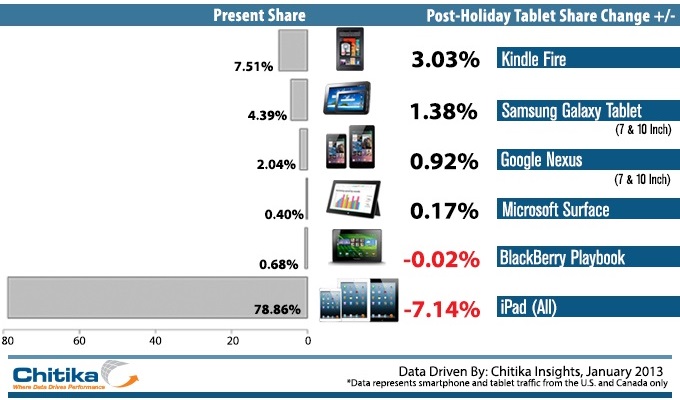 Counting on others, the iPhone 5 and Samsung Galaxy S III posting gains of 1.1 percent and 1.0 percent in smartphone usage shares respectively. While, adding further, Apple iPad saw a decline in over more than other popular tablets from 7.14 percentage points to 78.9 percent. Samsung also extended its lead within the large-screen smartphone, or “phablet,” market with share gains by its 5.5-inch Galaxy Note II, while competitor HTC saw no share gain for its 5-inch Droid DNA.