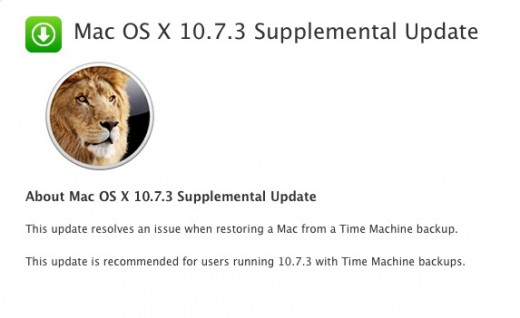 Apple has released a patch to Mac OS X 10.7.3 which it describes to be as Supplemental Update. Apple originally released the 10.7.3 update on February 1st which includes a bunch of additional languages and a server update, as well as updates to the Server Admin Tools and Remote Desktop Client. The new update is designed to fix issues when restoring your Mac from a Time Machine backup. It’s a relatively small update, running just over 24MB and can be downloaded directly from Apple here or via Software Update on your Mac. If you wish to go through the full technical details of the original 10.7.3 update, it is available here.