According to the latest figures from Strategy Analytics, Android tablet shipments up to 67% in the second quarter 2013, while iOS fell to 28.3% and Windows secured 4.5%, while overall global tablet shipments has reached 51.7 million units, up 43% from 36.1 million in second quarter 2012. The research firm says that Google’s Android platform making steady progress while Apple struggled as it didn’t having any new tablet to sell. 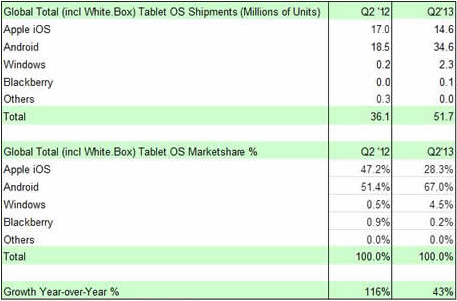 “Apple iOS shipments were 14.6 million iPads in Q2 2013 which declined 14 percent annually,” Peter King, Director of Tablets at Strategy Analytics, said in a statement. “In the same quarter a year ago the first Retina display iPads were launched which could partly explain the decline as there were no new models in this quarter. However, to compensate that, iPad Mini which was not available a year ago, now freely available was expected to take the figure higher than 14.6 million.”