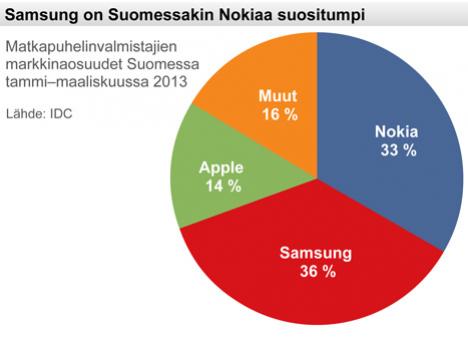 “It’s all about Samsung” going on as first Samsung topped the Chinese smartphone mobile market chart, then worldwide and now another report suggesting that Samsung for the very first time holds larger market share as compared to Nokia in Nokia’s own land i.e. in Finland.

According to IDC – via Digitoday – Samsung holds the market shares in Finland of 36% while Nokia having 33% in the first quarter of 2013. Interestingly, the third place was with Apple, trailing at 14 percent.

The research firm suggests that how badly Nokia’s Lumia phone have done in its home ground result of which the company saw such a low although since smartphone sales have generally increased, result of which Nokia-owned phones sales have mostly fallen.