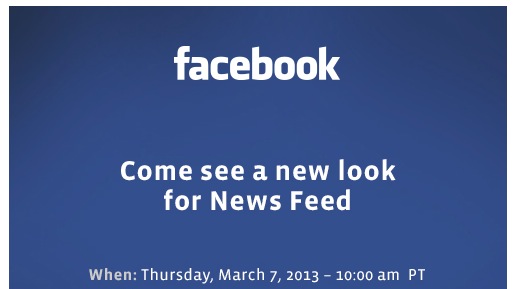 With glimpse already around shared by TechCrunch in its report last month, the social giant has sent out an invite to press for an event to show off a “new look for News Feed” at Facebook’s Menlo Park headquarters on Thursday March 7th, 2013 at 10am PST and we will be covering it live bringing every second story.

It’s being now over a year back in September 2011 when Facebook officially launched a major change to its News Feed as well as the iOS app also got a better and faster News Feed and timeline. There are rumors which make sounds like that the News Feed redesign could be a more image-centric feed which somehow looks like same to news readers.