Earlier today we reported that Apple has released OS X 10.7.3, an update to its operating system for Mac computers – the third maintenance update to OS X Lion. The update adds support for several new languages and fixes various bugs – users on Apple’s support forums are reporting severe problems after updating to 10.7.3. 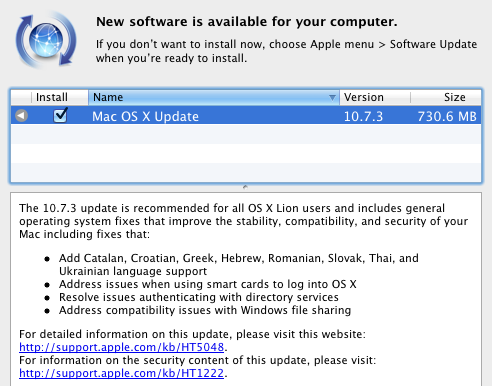 Every single app crashes results in issues with a bizarre CUI error. This problem typically manifests itself for those who updated using the Software Update tool; users who manually downloaded Apple’s Combo Update report no problem yet – some users also reported successfully installing 10.7.3 with the Combo Update after restoring their broken Macs.

If your computer is affected and you’re able to download and install the Combo Update on your affected Mac, there’s a chance of getting the machine running normally again. Well for the time being until Apple provides further updates on this and fixes the problem – we’d advise you to avoid this update.