Earlier this month, Google introduced Google Play, a digital entertainment destination where you can find and share your favorite apps on your Android phone or tablet in France. Today the search giant added more movies for rent to Google Play for people in France, including hundreds of full-length feature films from major Hollywood and French studios. These movies will also be available for rent on YouTube.

From blockbusters like Les Aventures de Tintin: Le Secret de la Licorne and Les Schtroumpfs, to new releases such as Twilight Chapitre 4 : Révélation 1ère partie, Le Stratege, The Thing, and Drive, and even French classics like Le Bal Des Actrices and La Grotte Des Rêves Perdus, you can find many of your favourite movies in high quality available to rent now on Google Play and YouTube. 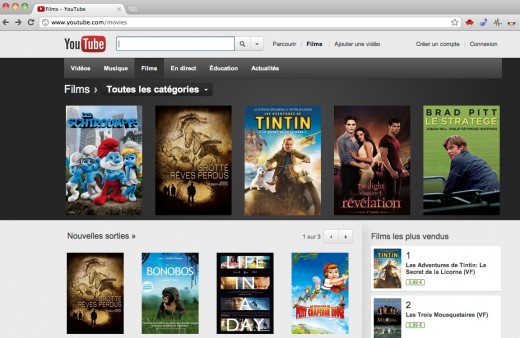 To make these films available, the company had partnered with many independent French studios including Cinéma(s) à la Demande, EuropaCorp, M6 Video / SND, Under The Milky Way, UniversCiné and Wild Side as well as major film studios such as Disney Europe, NBC Universal and Sony Pictures Home Entertainment France.