An online video ad company FreeWheel study revealed that Xbox gaming console is the most popular non-PC device to watch Web video. That means more people are watching Web stuff on Microsoft’s machine than on the iPad, iPhone, or any Android machine, anywhere. And when it comes to home viewing, competitors like Apple TV, Google TV and Roku are so far behind they’re not even competitors. 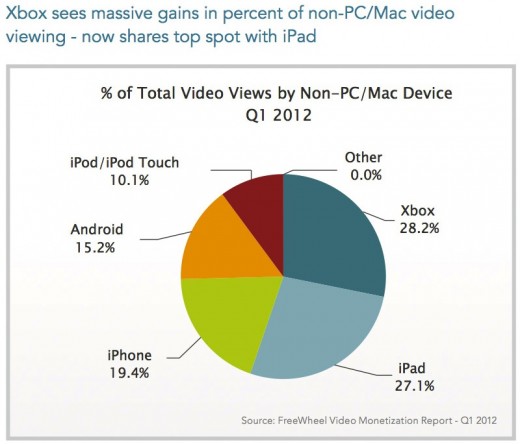 “Xbox is definitely one of the brightest opportunities for increased professional content distribution – it has very high penetration rates in US households and its users are now using it more to view entertainment than to play games. As they continue to strike additional content deals, we expect the share of video viewing on this devices will only increase over time. It is also setting an important precedent for distributors to create multiple revenue streams – in the case of Xbox, it’s a combination of authentication via your cable subscription, Xbox LIVE Gold subscription, AND advertising. They’re training the industry to stop thinking of ‘Which revenue model?’ and instead think of ‘How many revenue models?’”