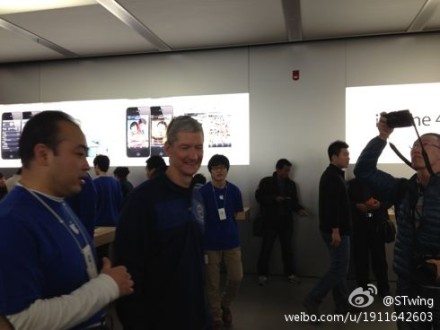 Tim Cook become Apple’s first CEO has been spotted in China by Sina Weibo users – via The Next Web, a number of who posted a photo of the Apple CEO talking to staff at the Apple Store in the Xidan district of Beijing in China. The company has not officially announced or confirmed the trip or stated that what brought Cook to China or what his scheduled is. Chinese publication China Daily claim he has come for a meeting with Wang Xiaochu, chairman and chief executive officer of China Telecom Corp. Others speculate the visit is for the iPad trademark case against Proview Technology.