According to the latest study by Sophos, IT security company, India is topping the chart overtaking US to become top spam purveyor in early 2012. India constitutes 9.3 percent of the world’s spam in the first three months of 2011, up from around 8 percent in 2011. US stand out with 8.3 percent of the world’s spam. The vast majority of spam comes from home computers that have been compromised by hackers, and commandeered into a botnet. Remote hackers can send spam from recruited computers, as well as potentially steal information or install other malicious code although it is good to note that the overall throughput of global email spam messages has decreased since Q1 2011. This is partly because of better work by ISPs around the world, but also reflects a change in tactics by cybercriminals. Spammers are increasingly finding traditional email spam ineffective, turning to social networks to spread these kinds of marketing spam campaigns instead. 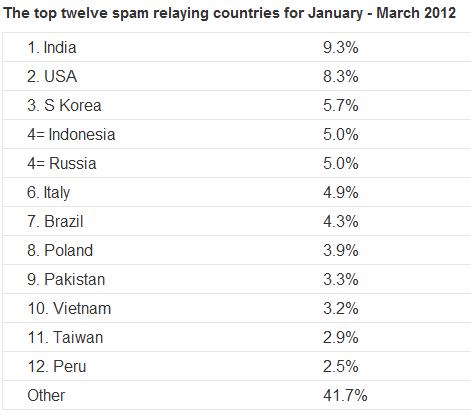