With the increasing iPhone 5 excitements over the air, Apple’s stock saw a great high and even still on same high level, with its recent share price was lead to over $700, resulting the Cupertino-based giant market capitalization to approximately $660 billion. But, now according to an independent European company specializing in trademarks, patent valuation and IP strategies, Eurobrand, Apple’s current brand value is at 100.24 billion euros (about $130.6 billion), up from 66.66 billion euros a year ago. 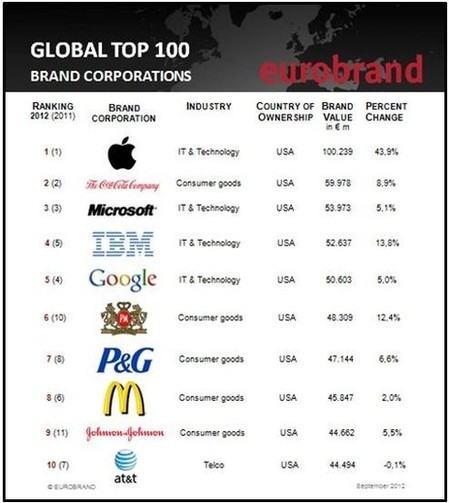 While on other positions, Coca-Cola ranked at number two, with an estimated brand value of 59.98 billion euros, Microsoft stands at number 3 with worth 53.97 billion euros and Google at number 5 with worth 50.603 billion euros but all by a staggering large margins. While IBM saw a 13.8 percent jump, overtaking Google and ending at fourth spot in the ranking. The biggest looser on the basis of stats is HP, which saw a decreased of 28.3 percent in brand value.