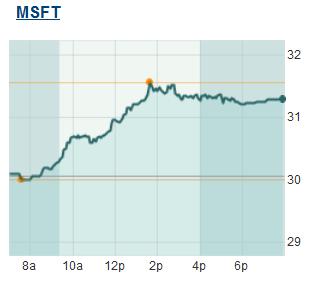 The day the Apple unveiled its Mac OS X 10.8 Mountain Lion version, Microsoft shares have risen to a nearly two-year high. On the other virtue, Apple’s stock price felt a dip earlier, possibly due to the iPad’s Q4 tablet marketshare drop-down, but has bounced backed mainly due to announcement of OS X.

According to MarketWatch, Microsoft Corp. MSFT shares rose almost 5%, to $31.55 Thursday, as the software giant’s stock price reached its highest point since April 2010. Microsoft, which reported strong quarterly results in January, has seen its shares climb 21.5% since the end of 2011.

Over the response, Microsoft’s investors may somehow believe the redmont-based giant coming Windows 8 as it is somehow going on the same tune of that of Apple – resulting Microsoft’s recent hike but need to be purely maintained now whereas Apple shows no sign of slowing its steep rise.