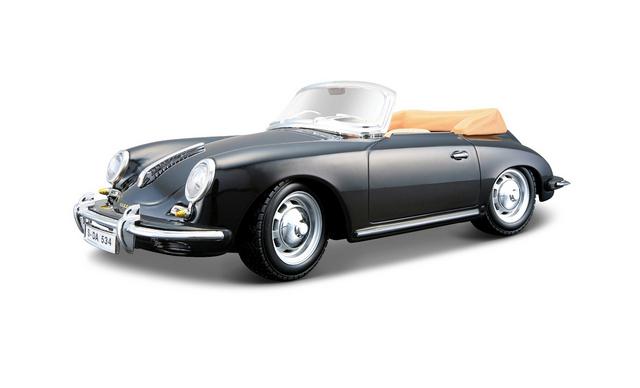 The Porsche 356 is a sports car produced in Germany starting in 1948. This was the first production automobile made by Porsche. It was known as a light, nimble, 2-door car, and people could get it either with a hard top or an open top configuration. The car was quite popular, and its success meant that the company continued making the 356 through 1965.  There were about 76 thousand of these cars produced over the years, and about half of those still exist today.

The original Porsche 356 was created by Ferdinand Porsche, who was the son of the company’s founder. The senior Porsche had designed the Volkswagen Beetle, and some design elements of the Beetle ended up in the 356. This included a 4-cylinder, air-cooled engine, mounted in the rear of the car. Initially, some of the parts in the engine and suspension came from Volkswagen too.

Driving one of the earlier Porsche 356s, you can tell that sports car design was early in its development. Driving at a modest pace on a mountain road, the car tends to let the nose drift going around a corner until the tail comes up too. You need to steer with commitment, or else the tail will be all over the place. Porsches were made for driving mountain roads – this is their home territory. It takes some time to get used to the steering, though.

This car has 55 horsepower with twin carburetors, but no anti-roll bar. The steering seems a bit vague, and the nose likes to wander. You need to make big movements to take a corner, yet avoid overcorrecting. The gear shifter is a bit difficult, and the brakes seemed to get less reliable over a trip through the mountains. The older Porsche 356 would need some design and engineering updates in order to turn into the legend it became.

Newer models of the 356 led to a different driving experience

Moving ahead to a later model, the Porsche 356B Cabriolet was also called the Carrera 2. This was the first of the company’s cars to use all-round disc brakes. The car is significantly more powerful, with a complex engine that delivers 130 hp at 6200 rpm.  When you drive this newer model, it feels like a new generation, and is so much more precise than its predecessor. The car is quick and responsive, with an anti-roll bar in front.

The engineering changes combine to give the driver far more confident steering than the older model. The car is easier to shift, with the gear lever farther back, and the brakes feel solid and secure. Driving the later models of the Porsche 356, you can see how the company developed such a reputation, and why these fun and practical sports cars have had so many fans over the years.

The basic design of Porsche 356 was maintained over the years. It had evolutionary, practical improvements rather than styling changes meant to fool the eye. A myriad of models were produced between 1948 and 1965, in both convertible and coupe forms. With each year that went by the cars got better and the driving experience was constantly improving.

Models in the Cabriolet category had a padded top and a full windshield. They were the first to hit the market. In the early 50s, the 356 Cabriolet represented 50% of the whole car production of Porsche. In 1954, the “Speedster” was introduced, and it quickly became one of the company’s most desired car models. It had a ranked, low windscreen, minimal folding top, and bucket seats, so it became an instant hit. By 1957, the Speedster was sold in 1,171 cars. Soon enough the “Convertible D” model took its place in 1958, which featured more practical windshield, side-windows, and a lot more comfortable seating.