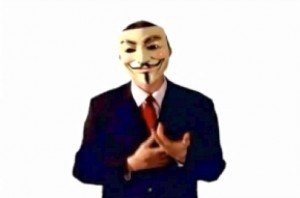 Anonymous last week have taken down The Supreme Court of India and All India Congress websites down over the internet censorship and adding more glitters in to in it , the group hacked in to the filtering server used by Reliance communications and filtered a lot of websites. Now moving a further step Anonymous have been staging protests across 16 cities in India, against what they say is internet censorship in the country.

“I’m here for internet freedom. There are restrictions on speaking online. That’s why I’m here,” says 19-year-old Amisha, a student who was one of around 100 protesters in Mumbai.”India is following China and Iran. They don’t want the right information to reach people,” said 20-year-old student Nishant, whose face was hidden behind a scarf and sunglasses.”

Talking with BBC via their internet chat room, members of Anonymous India said were representing the “common man.” The group with the protests now took things a step further by organizing protest groups in 16 Indian cities, including Mumbai and New Delhi.