Internet advertising revenues for the first quarter of 2012 set a new record for the reporting period at $8.4 billion, according to the latest Interactive Advertising Bureau (IAB) Internet Advertising Report both from IAB and PwC U.S. It is the highest first-quarter revenue ever measured by the IAB and PwC and a $1.1 billion–or 15 percent increase–over the $7.3 billion figure reported in the first quarter 2011.

“More online consumers than ever are taking to the internet to inform and navigate their daily lives—by desktop, tablet or smartphone,” said Randall Rothenberg, President and CEO, IAB. “Marketers and agencies are clearly–and wisely–investing dollars to reach digitally connected consumers.”

“The year-over-year growth between Q1 2011 and Q1 2012 sets quite a milestone,” said David Silverman, Partner, PwC U.S. “Moreover, a 15 percent increase over the comparable period in 2011 is a solid affirmation the internet is delivering on its promise to attract consumers and the advertising dollars that follow.” 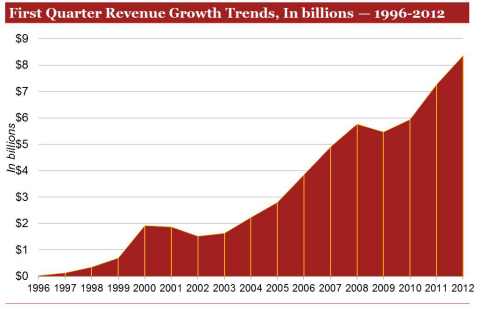