Anonymous last week have taken down The Supreme Court of India and All India Congress websites down over the Internet Censorship. But, adding more glitters into in it, the hacker group hacked into the filtering server used by Reliance Communications and filtered a lot of websites. As reported by Naveen Thakur writing for White Code, visitors to Twitter web were seeing the following message from Anonymous:

Anonymous REVENGE / WE OWN YOU

People We for 1 entire week attacked government websites, run by your money and no one in your government cared, then we decided to hit the Rich guys in the entertainment and IPL and Reliance and your government sprang into action. Shame on this government. It is time you people realized that this government don’t care about you. If we had attacked what belong to you they wont have minded. But if at all the smallest scratch appears on the rich and elite they are up and ready to act. Time you throw away these puppets of the rich and replace it with a new system that respect the constitution.Here is a list of all sites block by the governement

#Government #india –> whitec0de.com/reliance-inter…#reliance got hacked again by #Anonymous. No one can stop us!

In another Message they released a press release of injustice of Reliance:

Press, ISP, and the Citizens of India

With this leak we are proving to you something that no one had ever attempted to prove. The Indian government is not only useless when it comes to protecting and serving it’s people but is also equally powerless when it comes to controlling the big guns such as reliance. The following is a list of Sites and URL’s blocked by reliance. Just give it a quick check with list that government has and see how many sites and URL’s are here without the peoples and governments knowledge. Or did the government of yours really know and kept quite due to the special Corrupt special services that they are running for them. Shhhh.. Before you deny It read more.When we first hacked into reliance they realised that we had the list and also cause of the media coverge they knew they were in trouble as they themselves knew that they broke the law and the trust of it’s customers. When they saw media was knowing this they started unblocking the sites to make it look like they are heroes and reliance did you feel it would be so easy for you to do that and not cross us. Bad Idea. You tried to change our passwords and tried everything you know to stop us. For your information We Dont Even Care If You Have A Password. Stop Attacking people and their freedom and we will stopEvery one check this list and see how many sites that has no court order or not even a complaint against them is blocked.

* Why has Reliance blocked AirIndia employees Protest page on Facebook.(marked in green and purple) —- Did the court issue an order for that too

Or does the government have some ties with reliance to help them kill the strike at AI. Bad Idea.

THINK INDIA THINK ARE YOU GUYS NOT TRUSTING THE WRONG PEOPLE

Time to wake up and get on the streets,

Throw out this corrupt system,

Join us, We have no leaders

We are a Legion

We do not forgive

We do not forget

You did not, you should have.

RT #opindia#Anonymous hacks reliance –> whitec0de.com/reliance-inter…Well money doesn’t get you everything after all.

Well, if you still do not know how it all get started, here is some recap of this, Indian internet carrier Reliance Communication followed by Airtel blocked video sites like Vimeo and DailyMotion and large number of Torrent sites although these sites are blocked as per Court Orders.

Here’s a screenshot shared by Naveen: 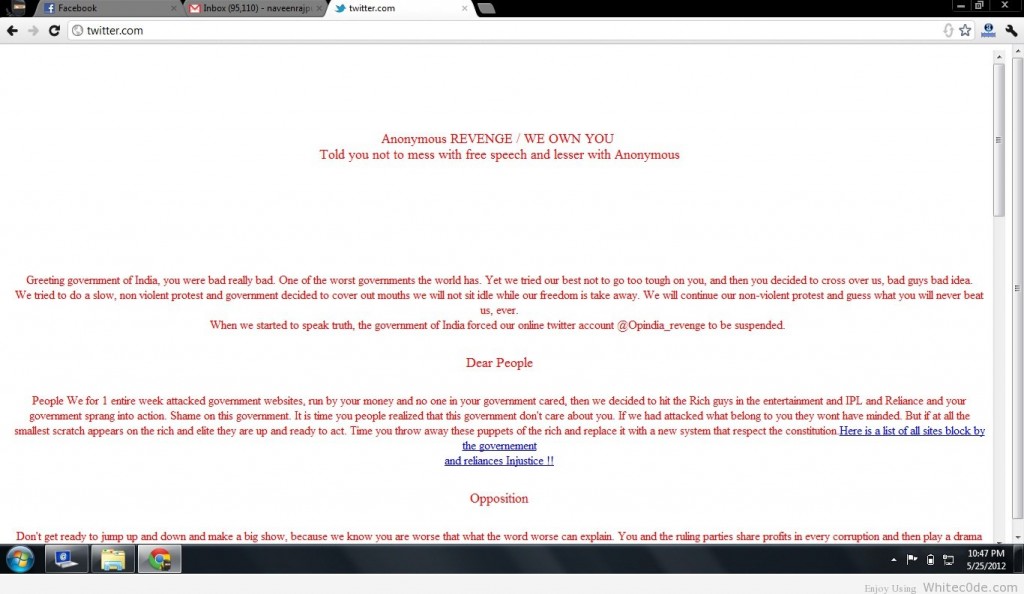