Facebook SEC filing revealed a lot of interesting numbers – including the one from its client list – the company mention in its IPO filing that social game-maker company, Zynga, accounts for 12% or $445 million of the social networking giant revenue. Facebook generated $3.71 billion in sales last year – with some $445 million of that came from its Zynga partnership – Facebook made $1.97 billion in 2010.

Within the last two days since social networking giant filed its IPO – Zynga’s stock has gone up by more than 26%, which closes at $13.39 last evening (PT). At the time of projection, when analysts at banks who underwrote Zynga – Goldman Sachs, Morgan Stanley, J.P. Morgan and Barclays Capital, along with analysts from banks not involved in the IPO, all put their target price above Zynga’s public opening amount of $10. As you can see (below) from the StreetInsider table – Street’s average target price drove up to $11.08. 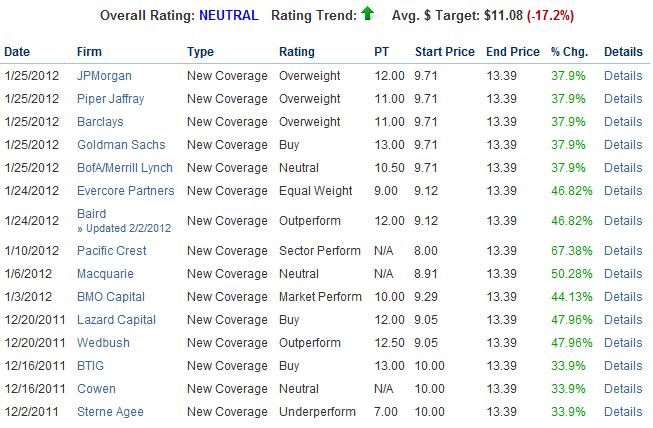 Trading volume leans to bullish calls over bearish puts, but both are unusually active. The heaviest in puts is to sell ZNGA at $12 and $13 within next two weeks, while for calls it’s to buy shares at $15. What might be termed Zinga’s “fear gauge” (a reading of 30-day implied volatility) jumps again to a new high of 120%, Livevol data show. The options market’s clearest takeaway is traders view ZNGA as a stock with plenty of volatility in its future.

Well there is still some more good new estimates about to come as Zynga will do its first earning call on February 14th.