January 18, as we have seen as the internet’s big protest day against SOPA and PIPA, hundreds of websites blackout for a day; including the big names like Google, Wikipedia, BoingBoing and many more.

There was even plenty of discussion about the issue on Twitter, especially the company tweeted that there were more than 2.4 million SOPA-related tweets between midnight and 4pm Eastern time. The top terms were SOPA, Stop SOPA and PIPA. Tell congress, and the hashtag #factswithoutwikipedia.

Wikipedia join the protest with other major websites, including the popular news sharing website, Reddit and Humor website, I Can Has Cheezeburger, who had earlier announced the January 18 as the blackout protest day. 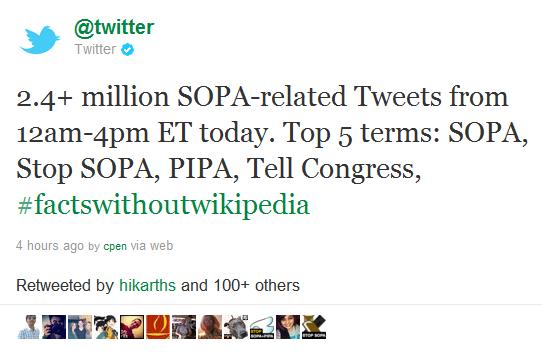 The day seen a lot of pace with the continuing protest against SOPA and PIPA.