Sony has sent an invite to several of French publication for its upcoming press event which is going to take place on Thursday, July 4 at 09:30. The invites reads, “Sony Mobile reserves a big surprise for you“while the graphic reads that “Do not forget to mark your calendars!”

The event indicates that Sony giving its first light to rumoured 6.4-inch device Xperia Z Ultra which will support an input device such as a stylus and pencil. The rumors so far detailed that the device will feature a 6.44-inch 1080p display and a Snapdragon 800 CPU. The invite has been sent in Germany and China as well, while the invite itself ask recipients to “note” the date in their calendar. 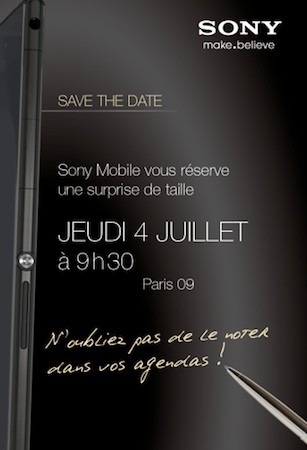