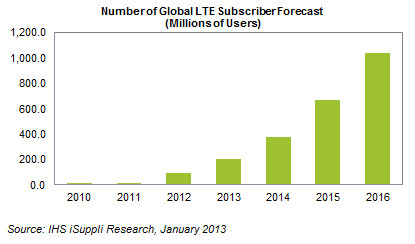 According to the latest figures from iSuppli, the worldwide subscribers to the 4G wireless standard Long Term Evolution (LTE) will more than double this year, passing 198 million by end of 2013, which is an up of remarkable 115 percent from 92.3 million last year. Since from the time when LTE first adopted in 2010 with just 612,000 users, the 4G next-generation wireless technology surged by an astounding factor of 22 to 13.2 million subscribers in 2011, and then taking another hype of 599 percent in 2012 to about 100 million subscribers with now by 2016, it is being expected that there will be over 1 billion LTE users.

“With LTE emerging as a true global technology standard, its ecosystem now faces both challenges and opportunities,” said Wayne Lam, senior analyst for wireless communications at IHS. “Rapid adoption will drive design innovations, particularly in smartphones, but issues like spectrum fragmentation will also remain an overhang for the LTE industry that requires attention. Overall, however, the LTE space will be less worried about rifts or divisions in technology, and more concerned with laying the foundation for sustained growth across the entire LTE landscape.”