According to the latest data from IDC, the worldwide PC shipments totaled 89.8 million units in the fourth quarter of 2012, down 6.4% compared to the same quarter a year ago as well as worse than the forecasted decline of 4.4%. It sounds like a strange, although with the launch of Windows 8, it all welcomes a whole new stage in the PC industry, but in real it hardly impact in sluggish PC demand, result of which PC market take a back seat to competing devices and sustained economic woes. 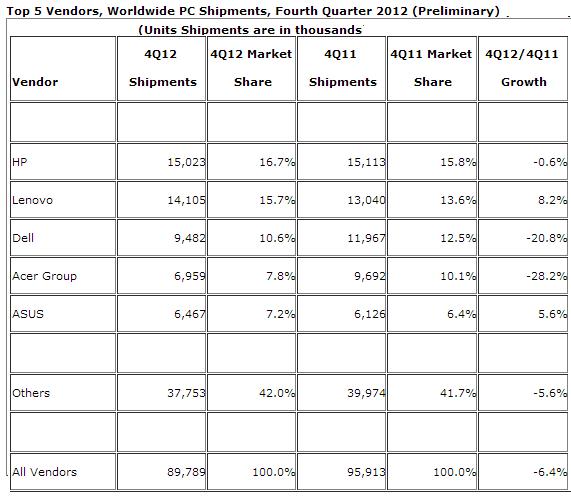 “Although the third quarter was focused on the clearing of Windows 7 inventory, preliminary research indicates the clearance did not significantly boost the uptake of Windows 8 systems in Q4,” said Jay Chou, senior research analyst with IDC’s Worldwide Quarterly PC Tracker. “Lost in the shuffle to promote a touch-centric PC, vendors have not forcefully stressed other features that promote a more secure, reliable and efficient user experience. As Windows 8 matures, and other corresponding variables such as Ultrabook pricing continue to drop, hopefully the PC market can see a reset in both messaging and demand in 2013.”

HP continued to defend its top position in IDC’s worldwide ranking, recovering somewhat from past weakness in key markets. An aggressive push for Windows 8 volume helped the vendor make gains in Asia/Pacific and its home turf in the U.S. HP struggled in EMEA but posted the first year-over-year growth in Asia/Pacific in four quarters. Total volume was nearly flat from a year ago, but better than the overall market.

Lenovo outpaced the market with growth of over 8%. Volume reached a new record-high of more than 14 million units, with continued success in channel wins in the U.S. and EMEA. Despite the positive performance, Lenovo’s gains remained significantly smaller than several quarters ago when the company was besting market growth by nearly 30%.

Dell continued to lose ground as it faces aggressive competition from other leaders and looks for better margins. Worldwide shipments were down over 20% year over year – faster than declines over the past several years – with U.S. volume declining almost as much. The firm did manage sequential growth in most other markets.

Acer Group, like a few other vendors, remains heavily dependent on consumer spending. As a result, it has continued to suffer as consumers focus on other products. At the same time, Acer’s cautious approach to the Windows 8 transition has contributed to slower notebook shipments.

ASUS held onto its top 5 spot globally and stretched the distance between itself and other consumer-focused vendors with growth of 5.6% year on year. The firm racked-up strong gains across many regions, where its often innovative yet price-conscious offerings still managed to take root in spite of an increasingly tough landscape.