According to the International Data Corporation (IDC) Worldwide Mobile Phone Tracker, vendors shipped 427.4 million units in 4Q11 compared to 402.8 million units in the fourth quarter of 2010. The 6.1% year-over-year growth was higher than IDC’s forecast of 4.4% for the quarter, but weaker than the 9.3% growth in 3Q11. The worldwide mobile phone market grew 6.1% year over year in the fourth quarter of 2011 (4Q11), as the feature phone market declined faster than anticipated, dragging market growth down to its lowest point in over two years.

“The mobile phone market exhibited unusually low growth last quarter, which shows it is not immune to weaker macroeconomic conditions worldwide,” said Kevin Restivo, senior research analyst with IDC’s Worldwide Mobile Phone Tracker. “The introduction of high-growth products such as the iPhone 4S, which shipped in the fourth quarter, bolstered smartphone growth. Yet overall market growth fell to its lowest point since 3Q09 when the global economic recession was in full bloom.”

While smartphones continue to grow in popularity, feature phones still comprise the majority of all mobile phone shipments. “Feature phones accounted for a majority of shipments from four of the five market leaders during the quarter,” said Ramon Llamas, senior research analyst with IDC’s Mobile Phone Technology and Trends team. “Even though their proportion is eroding, feature phones maintain their appeal on the basis of price and ease of use.

Apple is at third-place with only 8.7 percent of the market, while the giants of Korea – Nokia and Finland – Samsung are out with 22.8 percent and 26.6 respectively. LG and ZTE are tied for fourth with both 17 percent market share. 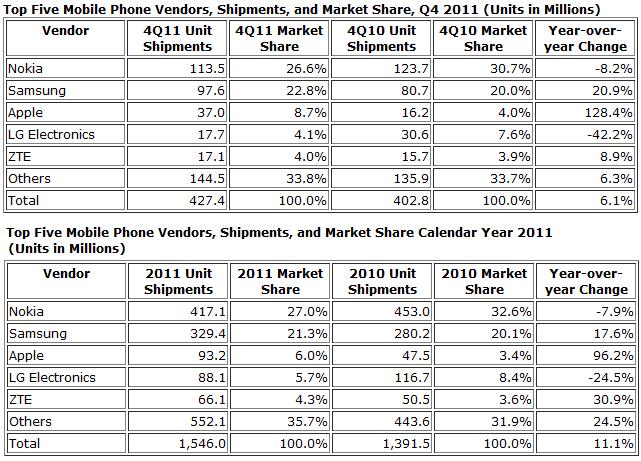