Hacker group Anonymous turns a regular last working day busy for the hacking collective – the group reported that it has broken into the website of a law firm that represented a US Marine accused of killing civilians in Haditha, Iraq. Anonymous tweeted that it had garb email from firm “Puckett & Faraj PLLC” and accessed more than 3GB of data related to the Haditha case. 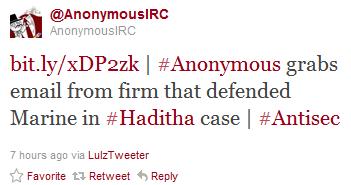 According to Anonymous, the emails contain “detailed records, transcripts, testimony, trial evidence, and legal defense donation records pertaining to not only Frank Wuterich, but also many other marines they have represented.” The group added, “We believe it is time to release all of their private information and court evidence to the world and conduct a People’s trial of our own.”

Gawker states, some of the e-mails contain congratulatory messages to Puckett for the settlement. In one of the e-mails Neal Puckett, Wuterich’s lawyer, tells a woman who congratulated him to “Google me!” Anonymous also promised detailed transcripts, donation records and case evidence in the 3GBs of e-mails.

Earlier the group first hacked Greek Ministry of Justice Website in protest against the controversial ACTA treaty – and recently group posted the tweet on the micro-blogging site with a line to an intercepted FBI/Scotland Yard telephone conference call, hacking FBI and Scotland Yard conference call.