Hacker group, Anonymous strikes again, this time it make a big bang by hacking the email accounts of Syrian president Bashar al-Assad’s aides.  The hacker group hacked some 78 username and password combinations for the accounts and 56 of those accounts used the password “12345”, while five others added just a “6” to that string.

According to Foreign Policy, few of the emails contained incriminating info, though the media has latched onto a message sent between two press aides suggesting some advice on manipulating American audiences for the Syrian president’s December 7th interview with Barbara Walters on ABC. It included advice on how to manipulate American perception:

“It is hugely important and worth mentioning that ‘mistakes’ have been done in the beginning of the crises because we did not have a well-organized ‘police force.’ American psyche can be easily manipulated when they hear that there are ‘mistakes’ done and now we are ‘fixing it.’ It’s worth mentioning also what is happening now in Wall Street and the way the demonstrations are been suppressed by policemen, police dogs and beatings” Leaked email from Sheherazad Jaafari.

Officials blamed the “poor password choice” for the attack, with some accounts using “12345” as the sole security. A list of passwords released by Anonymous suggests a huge proportion resorted to a simple string of numbers, while others included “iloveyou” and “GODisgreatand1″. 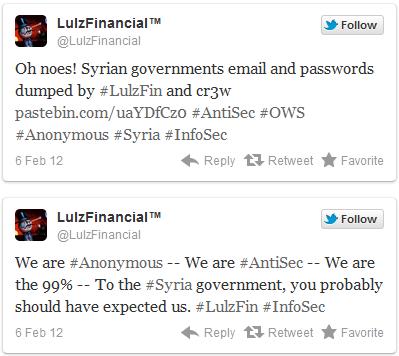 The group earlier announced the period of whole of March as “Black March”, stating, “We will not tolerate the Media Industries’ lobbying for legislation which will censor the Internet,” – pointing boycott of music, films and other media throughout the month of March.