According to IHS iSuppli report, the global television shipments to shrink this year, with expecting a decline by 5.4 percent in 2012 due to the first decrease since the widespread commercialization of flat-panels take place. Back last year in 2011, television shipments reach all time high to 255 million units, but this year it has slowed down  to 241 million this year. 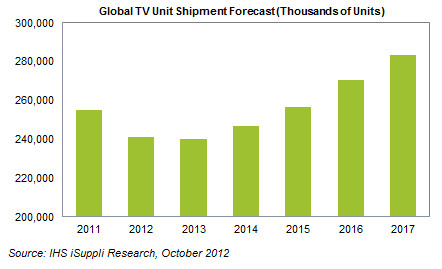 The drop in volume is due to decreased TV shipments into Japan, down from 19.8 million units in 2011 to just 7.5 million units in 2012. CRT TV volumes will slide from 25.5 million in 2011 to 15.8 million this year, while PDP TV shipments will retreat to 8.9 million in 2012, down from 13.9 million last year. iSuppli predicts that by 2015 global shipments return to growth, and sales will rise in countries such as Brazil, India and Indonesia.