China which we known for its huge population but do we also know that it caters one of the world’s largest market for smartphones. According to new data from Flurry, it has been revealed that some 109 million users already and some 122 million customers are in the span to buy new smartphones showing an ability to adopt Android and iOS devices at the fastest rate worldwide for the first time ever. 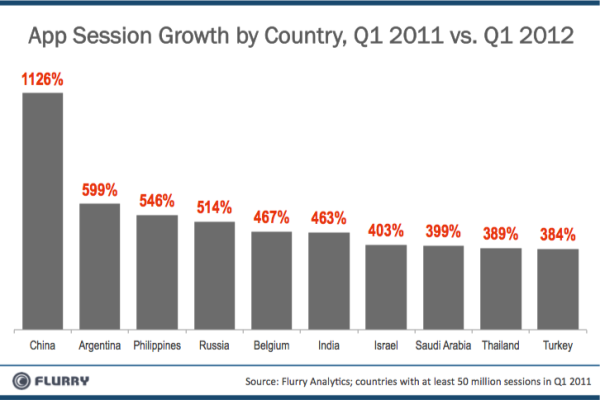 Comparing Q1 of 2011 versus Q1 2012, the chart above shows the ten fastest growing countries in terms of app sessions.  A session is the launch and use of an application. Starting on the left, China leads the world in app session growth, with an enormous growth rate of more than 1100% between Q1 2011 and Q1 2012. China’s growth rate is particularly staggering given that it was already the world’s 7th largest country in terms of app sessions by the end of Q1 2011.  This speaks to the country’s sheer population as well as increasing affluence among a meaningful part of its population.  Please note that we project the last ten days of Q1 2012. 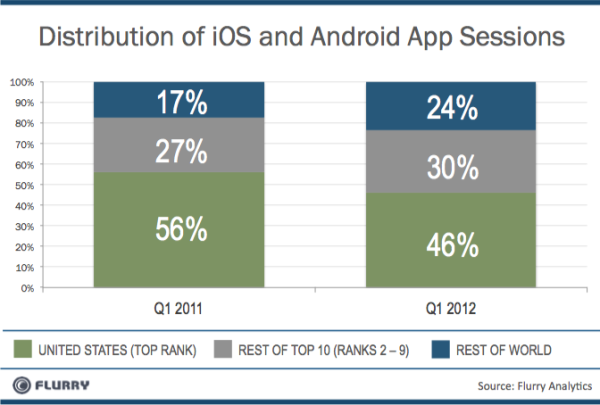 With China now activating more devices per month than the U.S., this means that the gap is closing between the two countries in terms of installed base.  Not only is China already the second largest app economy, but also could eventually overtake the U.S. as the country with the largest installed base of smart device users.  Flurry’s data states that the U.S., a more mature market, currently has more than twice as many active devices than China.  However, China, a faster growing, emerging market, already has twice as large an installed base as the next largest market, the UK.