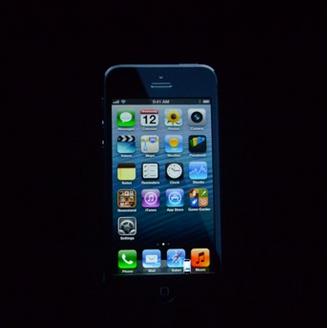 Apple today at its ongoing iPhone event unveiled the next instalment of iPhone, the iPhone 5. The company names iPhone 5 the sixth-generation smartphone and is presently detailing its full set of features, specs, and release details. The phone is made entirely of glass and aluminium and claimed to be as the world’s thinnest smartphone. It is 20% lighter than the 4S having retina display, 326 PPI. The new screen on iPhone 5 is a 4 inch display with 1136 x 640 screen resolution and 16:9 aspect ratio.

The phone is having the most accurate display in the industry. The touch sensor is integrated right into the display itself, means there are now no layers and is now made sharper. The company added HSPA+, DC-HSDPA, and LTE. There’s now a single chip for voice and data, and a single radio chip. And we have a unique Apple advantage with a dynamic antenna.

Since it sounds complicated that LTE is a part of new iPhone, the carriers who are working with includes in the US, Sprint, Verizon, AT&T for LTE. In Canada, Rogers, Telus, Bell. The further features include Wi-Fi, 2.4 GHz and 5 GHz on 802.11n. Since, everything changes with the new iPhone, so as the Apple A6 chip. Compared to the A5, it’s two times faster and 2x performance across the board.

The battery life is much better than as expected and exceeded to that of the iPhone 4S. Talking about the camera, it consists of 8-megapixel, backside illuminated, hybrid IR filter, dynamic low light mode, precision lens alignment, sapphire crystal. The camera functions offering better low light performance. The new front-facing camera offers 720pixel video and face detection. FaceTime will also now be available over a cellular connection.

This is 40% faster on photo capture and with iOS 6 and iCloud, we have new feature called shared photo streams – its panorama mode. With the new panorama mode feature, you get beautiful photographs and images as it creates seamless transitions between these photos. Further there are improved speaker designs – 20% smaller. There is wideband audio with which you can fill up more of the frequency spectrum. Next are the connector, and the new one is called Lightning. All digital, 8-signal design, adaptive interface, improved durability, reversible.