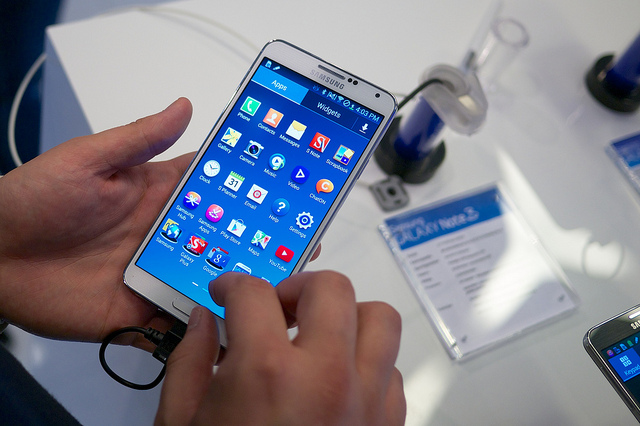 If you have planned to buy a smartphone then you should first consider Samsung Galaxy Note 3. Now, you may think why only Note 3 while there are so many high-end devices available in the global market. So, the answer is quite simple, with Note 3, you will get an all-round performance, which cannot be expected with other ordinary devices. Here, in this article, we are going to share the top 10 reasons to select Galaxy Note 3 as a personal companion.

First impression is the last impression and Samsung Galaxy Note 3 adores it in its best screen ever. The size and quality of its display shows that it is perfectly build to cater your tablet PC needs. The device performs like a complete multitasking Android tablet which we never seen before in the history of smartphone development. It has a wide 5.7” full HD super AMOLED screen, which is, of course, lager than its previous sibling to offer Cinema like experience.

The Super AMOLED technology is designed to offer sharp, crisp, clear and life-like video playback which we were missing from years. Moreover, its extra-ordinary screen enables you to read texts, e-books and other stuff without straining to our eyes by using its Pinch-Zoom technology which never distorts text quality and impression.

However, Note 3 maintains its predecessor’s usual outward look but it also offers tactile quality and classiness. The very first point that you feel when hold this advanced device is that, it gives you a soft-touch and comfortable feeling. The material used in designing its outer casing is well optimized to offer luxurious touch and it is evident with its back panel which has leather touch case with decent stitching. In concise, holding Note 3 really provides a premium look to your personality.

Apart from that it is also available in various colors to choose from such as classic white, jet black and blush pink.

The most significant advantage of selecting the Samsung Galaxy Note 3 is its S Pen Stylus which is the most advanced on-screen stylus of the market. Simply, press the S-Pen stylus button by focusing its tip on the screen and you will be able to operate its Air Command menu. It’s the most powerful function of Note 3 that enables you to access 5 significant functions i.e. Screen Writing, Scrapbooker, Action Memo, Pen Window and S Finder.

All these five functions comprise loads of innovations for instance the ability to pop up new window on screen by drawing boxes or searching a new thing on available content data.

Security is the most important part in the development of Galaxy Note 3, since hackers keep their eyes on vulnerable devices to steel confidential data and documents. By keeping this fact in mind, Samsung Galaxy Note 3 comes with a new hard-to-break security feature known as Samsung KNOX. This feature lets you to store data as well as run security-seeking apps inside a protected area called “Container”.

Container functions by offering protection against phishing and malware attacks on your smartphone and keeps your data away from the reach of hackers. So, you can easily save or store you private videos, photos and other files inside a protected space in your Note 3.

Multi-tasking at its ease

Multitasking is considered among the most appreciated features found in Note 3. The multitasking ability of this device set it apart from the usual smartphone crowd. On the top of that its large screen also helps in using multitask features easily but effectively.

Therefore, you shouldn’t be surprised with its incredible multitasking performance. The multi window allows you clasp between desired apps even without closing existing window. Thus, you can easily use two of the similar applications simultaneously.  With additional two ChatOn windows, you can continue chatting with two people at the same time.

Furthermore, the valuable Drag & Drop mode also helps you in pulling content like images or text from one window to another effortlessly. In concise, Note 3 can simply cater your need of having a laptop since it offers you same level of multitasking.

Samsung Galaxy Note 3, having a 2.3GHz Quad-core chip as well as 3GB of RAM, is surely more responsive and faster than its predecessors. The smart device not only supports 3G but also 4G connectivity. Furthermore, while selecting a Note 3, you have an option to choose a handset with either a 64GB or 32GB of onboard storage.  In case, you find onboard memory insufficient for you then you can easily expand it by using a micro SD card to expand its ability to store data upto 64GB.

Note 3 Smartphone also comprises a 3200mAh battery, which is very durable and long lasting. It means, while playing games, watching movies and listening to music, you needn’t worry about low-battery signal.

Apart from KNOX security feature, Galaxy Note 3 also comprises a new anti-theft protection feature known as “Find My Mobile”. Therefore, by using this anti-theft feature, you can easily inactive your smartphone in case of it being lost or theft.

In case of losing or stealing of the device, its new anti-theft feature called “Find My Mobile” allows you to locate your Galaxy Note 3 easily and fast.

Can coupled with Samsung Galaxy Gear

The wristwatch like gadget, called Galaxy Gear, has generated loads of attentions towards it since it was released. Galaxy Gear has been engineered as a companion device. It functions superbly with Note 3 Smartphone. Galaxy Gear makes your every-day life easy and comfortable. For instance, it allows you to make as well as receive hands-free calls anywhere without looking at your phone. It also notifies your important text messages, emails and even Facebook notifications through its “Smart Relay” feature.

Samsung is renowned for offering far-fetched built-in software in its mobile devices. Thus, it is also true with Samsung Galaxy Note 3 as it comes with loads of new and user-friendly built-in software’s. This smart device has mind-blowing software like social media integration, My Magazine (a personalized news service) and many more – as the list is endless.

Added to that “Group Play” feature allows you to play same music and videos to your desired groups. Another significant innovation is “S Note”, a note creating or taking application.  Now, with the help of S Note, you can write your important note and set alerts on it.

It is faster, classier, more sophisticated and slimmer

Samsung Galaxy Note 3 is considered as an exclusive evolution in the usual crowd of smartphones. In short, it is faster, smarter and slimmer device ever that gives you premium feeling of having a premium Smartphone.

Therefore, with Galaxy Note 3 and Galaxy Gear, you will be provided maximum possible flexibility to communicate, update and entertain yourself whenever and wherever you like. Let’s explore the best deals on this handset at Online Phone Contracts.