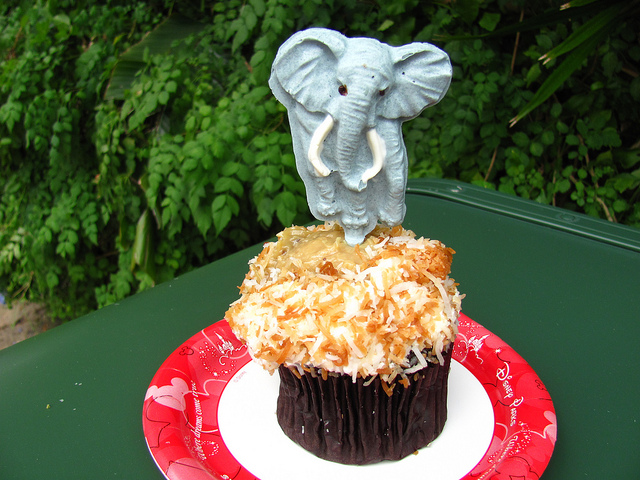 Who doesn’t love cupcakes? From the humble, homemade cakes with buttercream frosting to the elaborate, unusual flavors seen on many cupcake competition shows on television, cupcakes are one of our favorite desserts — and they show no signs of giving up that title any time soon.

And when it comes to sheer variety of cupcake flavors, perhaps nowhere else will you find as many options as at the Walt Disney World Resort. Sure, you can pick up a simple chocolate cupcake with sprinkles about anywhere in the theme parks or resorts, but when you see the dozens of other available options, you could be forgiven for thinking that those “plain” cupcakes are boring.

If there’s one word that captures just about everything that happens at Disney World, it’s “theme.” Everything, from the resort hotels to the restaurants to even the public restrooms, has a theme. It only makes sense the cupcakes you’ll find in almost every restaurant, bakery and snack stand have themes as well.

In most cases, Disney cupcakes are related to the location where they are found. For example, at the Kusafiri Coffee Shopin Disney’s Animal Kingdom theme park, you’ll find the White Chocolate Elephant Cupcake, a chocolate cake with vanilla buttercream frosting topped with toasted coconut — and an elaborately carved white chocolate elephant lollipop; the same coffee shop also offers a Cotton-Top Tamarind version, with the cute little creature made from both white and dark chocolate.

You won’t just find cakes themed to the park or resort you’re in, either. Disney bakers create special cupcakes for every season and holiday. One of the most popular cupcakes is only available during the holidays: the Chocolate Peppermint Cupcake With Candy Cane Sprinkles, found at the Contempo Café in the Contemporary Resort. This chocolate cake is filled with chocolate syrup and topped with peppermint buttercream and candy cane pieces. You’ll also find themed cupcakes for Halloween, Valentine’s Day, Easter and about any other holiday or event you can imagine.

And the themes don’t stop there. Sometimes, when a new film or attraction opens, Disney World bakeries will offer special “limited edition” cupcakes to celebrate. In 2012, when the new “Legend of Jack Sparrow” attraction opened at Hollywood Studios, you could find the special Pirate’s Treasure Cupcake, a chocolate cake topped with fudge buttercream and garnished with chocolate pearls; the cake came in a special box with additional memorabilia, including a coin and a key commemorating the new attraction.

With so many cakes to choose from, it can be hard for a cupcake lover to choose.That being said, there are a few “must-try” cakes for any cupcake lover; if you’re lucky, when you book your Orlando hotel room, you’ll be located in one of the resorts that offers these tasty treats.

Macaroon Cupcake: Macaroons are all the rage these days, and at the Art of Animation Resort, you’ll find them paired with a cupcake. The yellow cakes topped with white frosting are decorated with three colorful macaroon cookies in the shape of a certain mouse.

Caramel Corn Cupcake: At the Karamel Kuche shop in Epcot’s Germany Pavilion, you can find all things caramel – including a plain vanilla cupcake topped with caramel drizzle and freshly made caramel corn.

Red Velvet Cheesecake: Found at several locations, this is a traditional red velvet cake with a twist: a cream-cheese center. Topped with vanilla buttercream with red sugar crystals mixed in and a Mickey pick, this is a popular, yet simple, pick.

And finally, perhaps the most legendary cake, the Butterfinger Cupcake at Hollywood Studios. A mammoth cake, this chocolate cake with vanilla frosting, chocolate coating and Butterfinger crumbles is made for sharing —not that you’d really want to.

In fact, most of Disney World’s cupcakes are on the larger side, making them easily shareable (if you can bear to share). Prices vary, but most are around $4, and if you’re on the Disney Dining Plan, they count as a snack credit. So the next time you’re looking for a little nibble when you’re touring the parks, grab a cupcake, and prepare for something special.