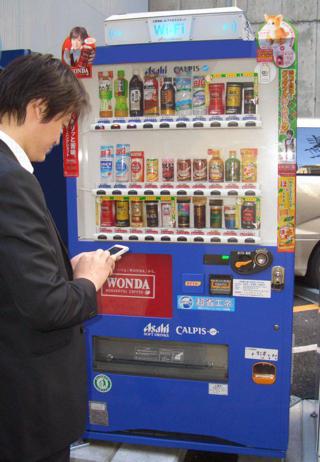 Vending machines and WiFi – Sounds little inappropriate, when listened for the first time. But what if it is true, Vending machines in Japan come with the ability to emit a free wifi signal within a 50 meter radius that anyone in range can use.

The wifi-enabled vending machines are powered by Freemobile and manufactured by Asahi, allowing users to log on – whether they have purchased a product from the machine or not, for free for a 30 minutes session. Once connected, users will see their location-specific information on the homepage, which Asahi hope will play a part in knowing the local areas more easily.

Asahi plans to set up 1,000 such vending machines in five different regions of Japan come 2012 – Tokyo, Sendai, Chubu, Kinki, and Fukuoka. After which the company has a grand plan of rolling out a total of 10,000 such units over the next five years. So if you’re going to be in Japan sometime and you need some help in finding some local stores or want sightseeing tips, you know which vending machines to look out for!