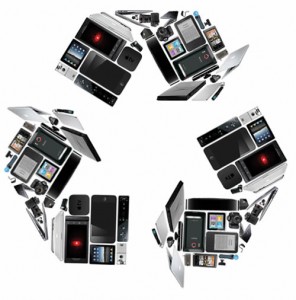 According to The Independent, Britons are throwing away 17 million gadgets, including mobile phones, music players, satellite navigations and more which accounts for a total worth of £762 million (about $1.20 billion) which are uselessly binned every year.

Mobile phone operator O2 states the same items would fetch an average of £43.54 if they were taken to one of the growing number of recycling centres springing up across the country. Tesco offers a more comprehensive service, paying cash for 3,000 different products including kettles, toasters, irons and flat screen televisions – although it pays in loyalty points rather than cash. Sainsbury, Boots, Asda and Royal Mail are among the companies that pay for used devices as long as they are in reasonable condition.

Susanne Baker, senior policy advisor on climate change at EEF, the association representing British manufacturers, said throwing away electronic gadgets represented a huge waste. “Electronic equipment in particular is rich with materials which are in high demand but scarce supply. We know many manufacturers are worried about securing stable supplies of these materials at the right price,” she said.

O2 is today taking its Think Big Blueprint pledge to introduce a far-reaching set of measures to make its business more sustainable – include a pledge to halve the CO2 emissions of its network and to help reduce the volume of carbon emitted by itself and its customers by 4 million tonnes a year.