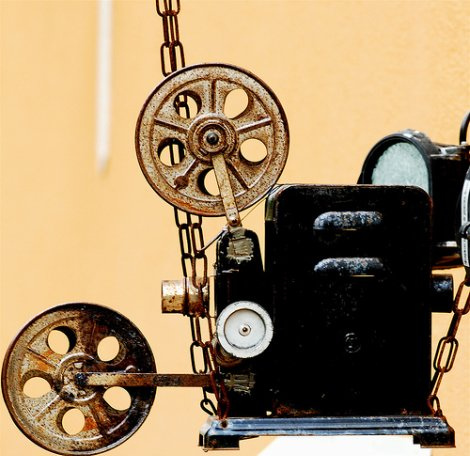 You will probably say that it is weird to go to the cinema when traveling as there are so many places you want to visit and the time is limited. Besides, it is not a problem at all to visit movie theatre in your home town! But there are movie theatres that are worth visiting!

Nowadays many small movie theaters are closed in Italy, but the Odeon is stable. Of course, being under patronage of Silvio Berlusconi, with such owners as RTI Mediaset media group and Alessandro Benetton, this cinema will be prosperous during the hardest times. Cinema is located in a stone building of the XV century Palazzo dello Strozzi, once owned by the Strozzi, the richest and most influential family of Florence. After the First World War, in 1920, 121 rooms were reconstructed creating a common space – a round hall with a stage where a movie screen was placed. Nevertheless, the interior decorations remained: the hall is still decorated with tapestries, crystal chandeliers, marble columns and original sculptures of the Renaissance. Every 45 minutes the session is interrupted and a pause is announced in order to allow talkative Italian audience to discuss the plot of the film, and pay attention to the design.

One of the oldest American car cinemas can be seen in such movies as “Twister ” and “The Shining”. Stories in both movies take place in remote American towns and the car cinemas appear in order to show simple and uncomplicated lives of Americans from the out-of-the-way places. And they still exist! On the territory of Shankweiler’s Theatre you will find classic snackbar with popcorn, donuts and Coca -Cola. The sound of the film is released through the radio, but if the car is not equipped with a radio, then when entering the territory a special stereo receiver will be given. In April, May and September, cinema is only open on weekends, but in summer movies are shown every day. Do not waste a wonderful opportunity to travel in time and feel the atmosphere of American small towns.

What features should a movie theater has in order we could call it fashionable? First, it should appear recently. Second, it should be surrounded by numerous boutiques. Third, it’s better is was decorated in the Italian style, as in Europe, perhaps only Italy still associates fashion with luxury. And fourth, it should have large leather chairs with wide arm rests, turning into small tables to create place where to put a glass of champagne, premium ice cream and other food. Fashion Island meets all these requirements. It appeared in the middle of December 2011 on the last floor of the mall Fashion Island in California neighboring with Gucci and Valentino boutiques. Fashion Island Cinema includes seven screens, 115 seats and a bar where you can order a pizza, salads, coffee. Before placing the restaurant in the cinema hall, marketers have studied the question on which is better: self-service or waiter. It turned out that even the most fashionable places tend to self-service. Besides, even a whisper of a waiter would interfere with watching the film. So, the visitors themselves go to the bar and pick up their orders on a tray.

It is called the most technologically advanced Asian cinema containing six screens with the best SRD-EX audio system and other gadgets. Tickets are not sold in the ordinary glass box offices, but distributed from the high stands similar to those shown in “The Fifth Element.” In addition, you can book a ticket and choose places online. Fluorescent arches, streamline walls, LED backlights, an aerodynamic roof made of metal structures and steel floor resembles movie theatre of future generation. The distance between the leather seats is big enough, so that the audience feels comfortable stretching out legs. In the menu says that the products in the bar are imported: cheese, olives, donuts, muffins, wine and mineral water, everything is brought from ten different countries.

About the Author
Melisa Marzett

Melisa Marzett is a professional writer whose essays are written on such topics as traveling, entertainment, cuisine. It is easy to connect with Melisa on Google+ Her articles are also available at essay writing service.