From Internet to Intranet – majority of major sites plus websites using “Https” protocol are down. Based on some reports, governments have blocked access to the major sites including to those too that contains “Https” protocol – including at the same time nobody can even use any of the banking service in Iran because the banking sites use “Https” to encode the sensitive data – the whole scenario seems to be like as shutting down of Iranian Web-O-Sphere down.

Hacker news states, “I’m writing this to report the serious troubles we have regarding accessing Internet in Iran at the moment. Since Thursday Iranian government has shutted down the https protocol which has caused almost all google services (gmail, and google.com itself) to become inaccessible. Almost all websites that reply on Google APIs (like wolfram alpha) won’t work. Accessing to any website that replies on https (just imaging how many websites use this protocol, from Arch Wiki to bank websites). Also accessing many proxies is also impossible.”

The reactions from Iran’s internet users states that Iran has blocked all SSL protocol, and any websites using this protocol are not currently viewable inside Iran. Users inside Iran must use circumvention tools like VPNs or proxies to access these websites. 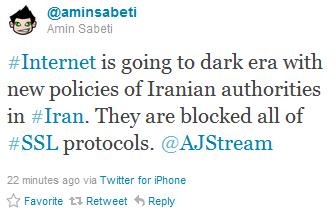 Gmail, Google (all the associated services) and Yahoo are affected by this limitation. Also BMI.ir, BPI.ir and Parsian-Bank.com serving online banking services cannot be used at this situation. Online gateways are affected too. People estimate this condition will be continuing until Esfand (next month in Persian calendar) after the 33rd anniversary of the Islamic Revolution.