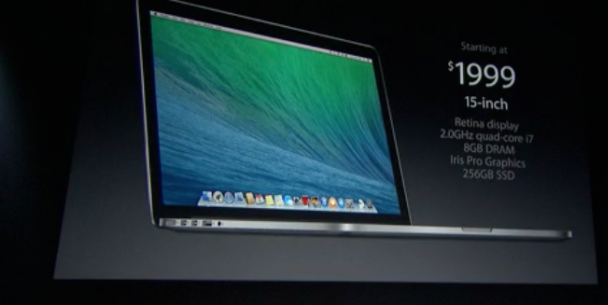 Announced first back in last June, Apple today announced new 13-inch and 15-inch Retina MacBook Pro models at its media event today in San Francisco. The new MacBook Pro costs $1,299 and $1,999 respectively with both shipping starting from today itself.

The 13-inch model is thinner and lighter as compared to earlier model and is 0.71 inches thick and 3.46 pounds in weight. It further halved the amount of RAM it actually does in its base model, while it now have a 9 hours of battery life and has Wi-Fi which is three times faster.

On the other hand, the 15-inch model comes with the new Crystalwell integrated graphics chips along with other performance enhancements. It is powered by a 4th-generation quad-core CPU, Geforce GT 750m graphics with 2GB of memory, and up to 8 hours of battery life.