SOPA (Stop Online Piracy Act), an act, if passed, would give the U.S. federal government power to disable a website it found to be in copyright violation law. If you do not agree to support SOPA, you must be surprised at first to found out that there is an android app that helps you take the next step to become a SOPA boycotter.

The app, free of course, can use to scan bar codes to help identify if products are either created by or intimately related to SOPA supporting companies. There are currently 800 brands/companies that had supported SOPA so far. 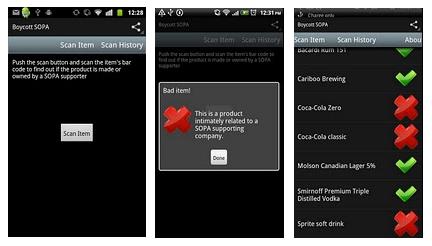 The app’s “SOPA supporters” list can be checked here and app can be downloaded from the following link.

The Stop Online Piracy Act (SOPA), also known as H.R. 3261, is a bill that was introduced in the United States House of Representatives on October 26, 2011, by Representative Lamar Smith (R-TX) and a bipartisan group of 12 initial co-sponsors. The bill expands the ability of U.S. law enforcement and copyright holders to fight online trafficking in copyrighted intellectual property and counterfeit goods. Now before the House Judiciary Committee, it builds on the similar PRO-IP Act of 2008 and the corresponding Senate bill, the PROTECT IP Act.