When Windows 8 Beta made available for the public, it is expected to get an access to Windows store also, the application portal that Microsoft has been working on for the OS. Details of the Windows 8 have been already making round in the public with lastly introducing two of its features – Refresh and Reset Your PC. The company’s CEO Steve Ballmer even mentioned during CES 2012 that Windows 8 is all set to launch in October this year.

According to Jonathan Wang, program manager at Microsoft’s Store client team, explains the main aspects of the service including the landing page design. Windows store was meant to deliver easy discovery capabilities to all users.  The company plans to constantly put new content on the Stores’ landing page. There will be featured and navigational content like categories and lists of featured apps. 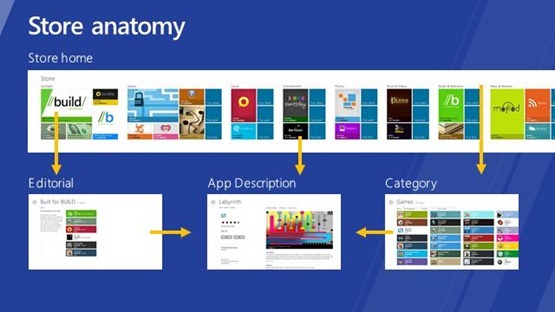 “We designed a landing page that integrates our featured content, data-driven lists, and category listings into one cohesive and engaging browsing experience,” Jonathan Wang explains. He further added, “Navigation is simple and consistent with Windows 8 Metro style UI, so it will be familiar and easy for Windows 8 users to find their way through the Store. Store categories are presented across the top of the screen, with compelling apps featured in each category.”

There will also be lists of the most popular apps, which will include the highest quality apps in each category (or the apps that Microsoft considers to have the best quality). There will be applications for promising new developers, as well as from those who have an established track record of great apps. There are also recommendations based on the customer’s past purchase history.

He concludes, “With a large number of categories, the flat navigation structure of the Store is really improved with zoom, which is one of the core architectural elements of the Metro style user experience design in Windows 8.”