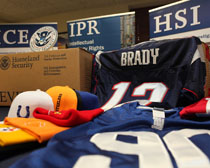 ICE director John Morton states, “While most people are focusing on whether the Patriots or Giants will win on Sunday, we at ICE have our sights on a different type of victory: defeating the international counterfeiting rings that illegally profit off of this event, the NFL, its players and sports fans. In sports, players must abide by rules of the game, and in life, individuals must follow the laws of the land. Our message is simple: abiding by intellectual property rights laws is not optional; it’s the law.”