Twitter today announced that it will be giving new users a custom-tailored list of suggestions stating to whom to follow, helping users to improve the amount of new accounts that people follow. The micro-blogging giant started experimented with tailored suggestions in a number of countries around the world.

The company will show new users a list of accounts that we recommend you follow, alongside a timeline filled with Tweets from those accounts. New users may see a list of tailored suggestions (left) and a timeline with Tweets from those accounts (right) as they sign up for an account. These tailored suggestions are based on accounts followed by other Twitter users and visits to websites in the Twitter ecosystem. 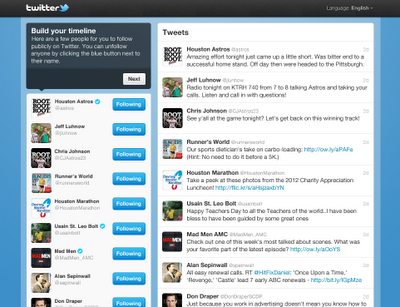 The micro-blogging giant earlier today had offered the feature “Do Not Track” for Mozilla, allowing the users to opt-out from cookies.