Ouya is an open source gaming console built on an Android framework that recently went on sale on June 25th. There’s been some buzz about it among gaming geeks but the average gaming consumer doesn’t know that much about it. But that’s There are a number of different things that make the Ouya stand out from other gaming consoles. 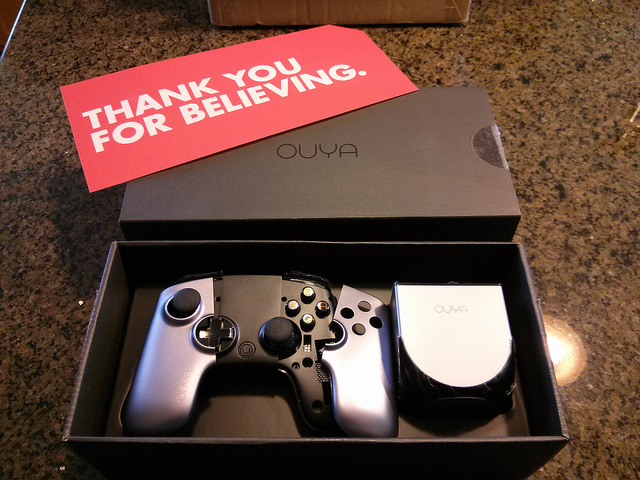 Its low price. At $99, it can be argued that this gaming console is among the most affordable in the marketplace.  New technology is usually exceptionally high when it’s first released and it goes down in price as the demand grows for it.  This is not the case for the Ouya.  It’s priced to sell and that could be one of the determining factors for its success.

Its free games. Try things out before you ever buy them.  You get the opportunity to test a game to see if it’s right for you before spending a penny on it.  Only after you’ve decided to purchase it, will you be required to enter your payment information to continue playing.

Its wide selection to choose from. It doesn’t matter if you like action games or puzzles, you’ll find something for everyone on Ouya and with the option to try games before you buy them, you’re likely to find something you never even considered playing in the past.

Its controller. Touch sensitive and complete with 15 buttons to use, the Ouya has one of the best controllers around.  Better yet, up to four controls can be hooked up at one time making the Ouya a truly fun and interactive experience for small groups.

Its support. The Ouya is all about storage.  It has a NVIDIA Tegra 3 processor, 1GB of RAM, and 8GB of internal storage which can be expanded by using a USB cable.  Games can be downloaded and videos and music can be streamed via Wi-Fi or Ethernet.

Its apps. Part game console, part music and movie player, Ouya allows you to stream films and songs across your TV.  You can access your favorite apps like Twitch.tv, Crunchyroll, iheartradio, TuneIn, XBMC, Plex and Flixster from one convenient device versus several.

Its innards. If you want to take a look at how this console works, unscrew it, open it up, and take a peak.  There are no mysteries where the Ouya is concerned.  It’s the first game console of its kind that opens without.

Its potential. If you want to develop an app specifically for the Ouya, it’s not a problem at all.  In fact, you get the tools you need as a developer whenever you purchase the console.  Build apps and become the next gaming millionaire!

Its games. As a new console system, the Ouya can’t compete with the sheer number of games that Xbox, Playstation 3, and Nintendo. But it already has an impressive list of titles:

The Ouya has earned its reputation due in part to its price point, response to fans, an incredible selection of apps, and innovative design.  When shopping for the next big thing in game consoles, you’ll want to see what all the hype is about.  A few minutes of playing the Ouya is all it takes for you to become hooked on this new piece of technology.

About the Author
Jay Preston

Jay Preston is author and Brand Manager for ToolHQ Tools. He enjoys writing about techie and guy stuff. You can find him on Facebook, Twitter, G+ and Pinterest.