According to TechNet, the “App Economy” has created an estimated 466,000 jobs in the United States, since from the time when Apple’s iPhone was introduced. The results was revealed after the study and research conducting during the period of 90-day ending December 31, 2011, where the group identified roughly 44,000 non-duplicated ads for computer and mathematical occupations and containing one or more of the keywords – Android, App, Blackberry, iOS, iPhone, Facebook API, Windows Mobile and Windows Phone, by comparing the results revealed were 952,000 wants ads for all computer and mathematical occupations over the same period resulting in App Economy wants ads made up 4.7% of the total tech job. 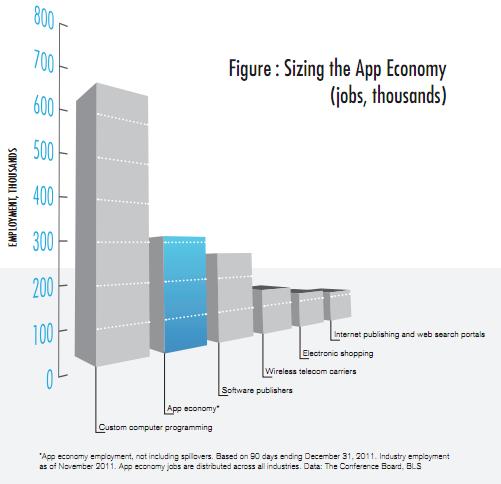 “It must be noted, of course, that the App Economy is only four years old and extremely fluid,” Mandel said in the report. “Both the location and number of app-related jobs are likely to shift greatly. The report specifies that this estimate includes all jobs at Facebook-focused companies like Zynga, as well as Amazon, AT&T and Electronic Arts, Apple and Google. If we go by geography, California leads the way as the most app-friendly state, though New York City tops the list of metropolitan areas.