According to a new study released today by Pew, some 88% of US adults own a cell phone while more than half of these i.e. 55% use their phone to go online as of April 2012, means an increase from 31% of cell owners who used their phone to go online as recently as April 2009. Furthermore, 31% of these current internet users go online using their cellphone. Nearly half of all 18-29 year olds (45%) who use the internet on their cell phones do most of their online browsing on their mobile device. 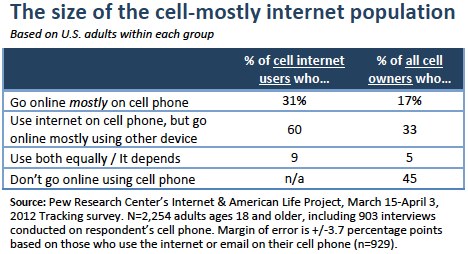 Half (51%) of African-American cell internet users do most of their online browsing on their phone, double the proportion for whites (24%). Two in five Latino cell internet users (42%) also fall into the “cell-mostly” category. While those with an annual household income of less than $50,000 per year and those who have not graduated college use their phones for most of their online browsing.