The Pew Research Center has released a new study showing that US internet usage patterns have shifted in recent years, with smartphones and social networks taking a lead ahead changing across numerous demographic groups. “Groups that have traditionally been on the other side of the digital divide in basic Internet access are using wireless connections to go online,” the study concluded. “African American and English-speaking Latinos are as likely as whites to own any sort of mobile phone, and are more likely to use their phones for a wider range of activities.” 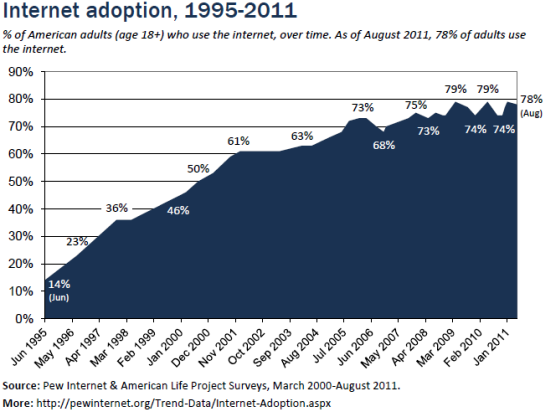 “Ultimately, neither race nor gender are themselves part of the story of digital differences in its current form,” the study said. “Instead, age (being 65 or older), a lack of a high school education, and having a low household income (less than $20,000 per year) are the strongest negative predictors for Internet use.” The findings, based on a survey conducted in the middle of last year, also found notably less Internet use by those who opted to respond in Spanish instead of English. “Yet even groups that have persistently had the lowest access rates have still seen significant increases over the past decade,” Pew researchers said.