According to the latest research from Strategy Analytics, it has revealed that Finnish mobile maker Nokia, which has an exclusive agreement with Microsoft to license the Windows Phone platform, became the world’s biggest Windows Phone vendor in the fourth quarter, as global shipments grew 36% to top 2.7 million units 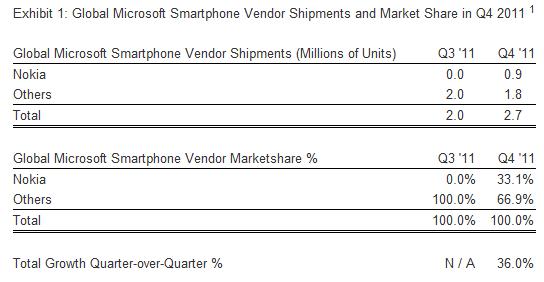 Neil Mawston, Executive Director at Strategy Analytics, said, “An expanded portfolio of Windows Phone 7 models such as the Lumia 800, an increased retail presence and highly visible marketing campaigns across several European and Asian countries drove Nokia’s growth. Nokia is by no means out of the woods yet, and it is still on a long road to recovery, but capturing top spot in the Microsoft smartphone ecosystem is an encouraging baby-step forward for the company.”

Accounting for almost a third of all Windows Phone shipments, Nokia captured the top position for the first time in its history — replacing Taiwanese vendor HTC — helped by sales of its Lumia 800 and Lumia 710 smartphones which both launched in November 2011. Strategy Analytics puts Nokia’s global Windows Phone shipments at around 0.9 million units, although the company itself announced that it had sold over 1 million units in its fourth quarter financial report.