According to the latest numbers from Strategic Analytics, the global tablet shipments has reached 40.6 million units in the first quarter of 2013, interestingly Android holds a 43 percent global market share, while Apple iOS having a strong 48 percent market hold, and not to forget the Windows secured a 7.5 percent global share. 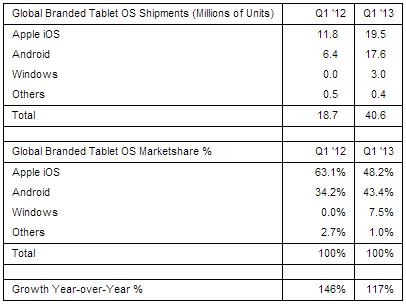 Other findings from the research concluded that the global branded tablet shipments grew 117 percent annually in first quarter of 2013, when compared with 146 percent annually in first quarter of 2012. Pointing over Microsoft percentage of global tablet share, it is to believe that there is a very limited distribution, a shortage of top tier apps and over the top confusion still making its place when comes to Windows tablet.