According to a new data released today by comScore, the smartphone audience in EU5 i.e. France, Germany, Italy, Spain and the United Kingdom now reaches the smartphone penetration 55 percent in October 2012. The study which revealed that Spain having the highest smartphone penetration in the continent, with 63.2 percent of mobile phone users, and also experienced the strongest growth rate with a 14.8 percent point increase as compared to previous year. 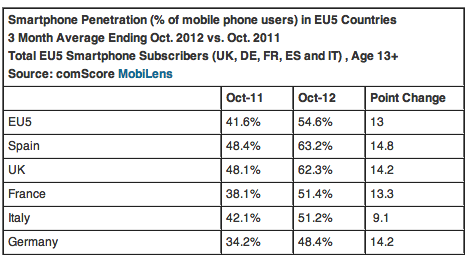 While Spain tops the smartphone audience chart, the European audience increased 35 percent in the past year, from 97.7 million users in October 2011 to current 131.5 million in October 2012. On the other count in the United Kingdom, Apple tops the chart as leading handset manufacturer, with covering 28 percent of the market accounting for total of 8.6 million users, while Samsung holding the second position accounting for total of 24 percent market share.