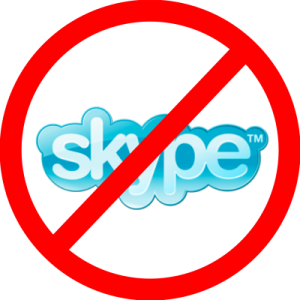 Internet Censorship – the hottest big thing in town as every second internet site is making its wing in the name of “being censored”. The latest in the wing we heard is of Skype – Yes, the Skype, known as Voice Over Internet Protocol, has joined the “being censored” list and file of those users in China.

CNET cites a report from the Financial Times, in which it is revealed that, through its Chinese partner Tom Online, the company has been removing sensitive words used by customers on its text and chat service in the country. The terms include but are not limited to: “Dalai Lama”, “Tiananmen Square” and ”Falun Gong”.

The censorship doesn’t apply to users connecting to Skype using a VPN, who are able to access a range of service that are blocked in the country.

Zennstorm indicates that the censorship practice was the price that the companies have to pay for doing business in any countries. He likened the censorship laws in China to any other laws that exist in Western countries, such as the United States or Germany.

From the last few weeks, we have seen a lot of news about the censorship – stating from SOPA, PIPA, than the current ACTA, and this Twitter country wise censorship.