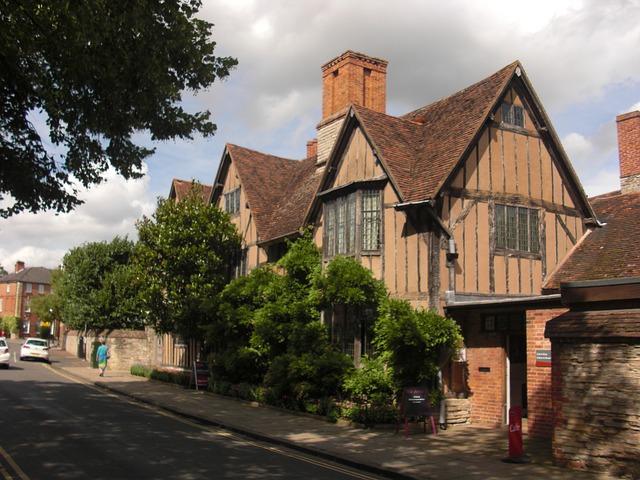 For the Shakespeare fan the ultimate holiday must surely be a short break or long weekend in Stratford-Upon-Avon: the birthplace of the great bard himself. As Stratford is otherwise a rather pleasant but unremarkable town, pretty much everything there is Shakespeare orientated!

Apart from the obvious: his home, his birthplace, the theatre, the museum and the tours, both walking and powered, it seems that you can get a taste of your hero as you eat, drink, shop and get your hair cut… I haven’t found him yet but I can even imagine the local bank manager is called Shylock!

So whilst it is the only place in the world where “Big Mac” will refer to Macbeth rather than MacDonalds, let’s see what the ultimate Shakespearean Vacation might consist of.

Your hotel of choice must be The Shakespeare. A central wooden framed property, with a modern wing behind so that your Shakespearean holiday does not suffer from Tudor toilets, it is the perfect place to feel in the mood from check in to check out.  Just 500 yards from the railway station, it is also handy to get to if you decide not to drive.

Whilst the RSC does tend to offer Shakespearian plays that is not always the case – some of their most successful productions of recent years have not been by Shakespeare at all! So check the programme and see what is on. Whilst it will no doubt be great, if you have planned a Shakespearean Break it would be disappointing to not be able to see a Shakespeare play!

Theatre Breaks offer short breaks, including tickets for all RSC productions and their website is a great place to make sure that you can book a break at a time when the RSC are performing Shakespeare!

Summer 2014 will feature Henry IV (parts one and two) and Two Gentlemen of Verona, whilst the winter season that will take us into 2015 promises Love’s Labour’s Lost and Much Ado About Nothing: two romantic comedies. But, let me remind you:  do check the dates, as the RSC present its productions in repertoire, so each week will see a different set of performances.

The other big draw to Stratford-Upon-Avon are the five Shakespeare properties in and around the town: the birthplace, Anne Hathaway’s cottage, New Place and Nash House, Mary Arden’s farm and Hall’s Croft. These are tied together by an excellent tour bus service that runs throughout the year, giving a running commentary as you explore the area.  You can hop on and off all day long at the Shakespeare properties and other points of interest.

Other places of interest

Do make time to check out the Shakespeare Experience. Take a fun walk down cobbled streets and peer back in time to the world that Shakespeare would have known.

Beyond the pull of Stratford-Upon-Avon’s favourite son, the town has many other attractions to recommend it. None more-so than the beautiful River Avon itself and a boat cruise is the perfect way to discover the town and have a look at it from a slightly different angle (and at a slower pace).

2014 is the year in which we celebrate the 450 anniversary of Shakespeare’s birth. So take this hint and head to Stratford-Upon-Avon and celebrate this remarkable man’s talent in style!