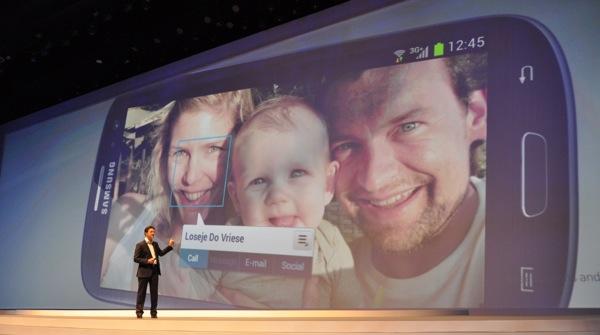 With just-announced Samsung Galaxy S III Smartphone, the company made it clear that it is not going to leave any stone unturned when talking about Android 4.0. The company with the latest Android version promises to be better thought-out with regard to how ICS actually works. The company has added natural interaction features, plus it also added a pop-up video” feature that allows you to view a video while doing other tasks. The company introduces S Beam which is built on top of the existing Android Beam NFC file sharing feature in Android 4.0. Samsung also updates its AllShare feature, with feature like “AllShare Cast” for streaming video, “AllShare Play” for sharing files, and a “Group Cast” feature for sharing screens with multiple other devices on the same Wi-Fi network. “Buddy Photo Share” for sharing photos directly to the people whose faces you’ve tagged in your gallery. Samsung has (boldy?) taken the “Tap to top” feature form the iPhone and added it in, for quickly scrolling to the top of a list. A quicker camera access and using on-screen buttons instead of capacitive buttons. The back button is on the righthand side, multitasking on the left. Seems Samsung fulfilled its promise in all extent. The company even announced new “Pop up play” feature. Pop up play lets you play a video anywhere on your Galaxy S III’s 4.8-inch Super AMOLED display. It’s picture-in-picture, except instead of your TV it’s on your Galaxy S III.